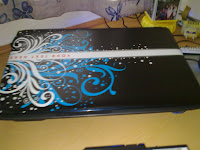 ha ha ha...
i only customize skin laptop...
and in the future i want to customize full laptop....
Posted by remi at 6:35 PM No comments: Links to this post
Email ThisBlogThis!Share to TwitterShare to FacebookShare to Pinterest
Labels: r7x7 is difficult to playing this game.. because AI Pes 2010 is hard... (^__^)
Posted by remi at 7:58 PM No comments: Links to this post
Email ThisBlogThis!Share to TwitterShare to FacebookShare to Pinterest
Labels: Football, Game Pro Evolution Soccer 2010
Pro Evolution Soccer 2010 (abbreviated as PES 2010 and known as World Soccer: Winning Eleven 2010 in Japan) is a football video game in the Pro Evolution Soccer series. The game was developed and published by Konami for release on ps2, ps3 and psp; xbox 360 and wii and mobile phones.
PES 2010 was announced on 8 April 2009 and the playable demo for the PC, PS3 and Xbox 360 versions was released on 17 September 2009. The game itself was released on 23 October 2009 in Europe.
Lionel Messi is a key endorsement player for PES 2010, having featured extensively throughout the promotion and development of the game. He features on the cover alongside Fernando Torres, another endorsement player.
Posted by remi at 8:46 PM No comments: Links to this post
Email ThisBlogThis!Share to TwitterShare to FacebookShare to Pinterest
Labels: Football, Game

Posted by remi at 5:09 AM No comments: Links to this post
Email ThisBlogThis!Share to TwitterShare to FacebookShare to Pinterest
Labels: EIS - FYP I

Nowadays, computer is an important machine for most of the organization or company. By using internet connection, administrator can monitor and know what user doing. The problem is not all place can have internet accessibility in their areas. Today, internet is communication with other people anywhere place. In this globalization era, information technology is very important because of the growing economy at our country. With the expanding of the Information technology section giving more development opportunity for other activity that can’t be archive before this.

Realizing that other sector such as the education, tourism and others whom doesn’t want to be left back in developing their sector to cope with the development of the IT sector, many systems have been developed to ease the management of the company.

Initially, this system has been researched in Universiti Malaysia Sarawak (UNIMAS). The main focus of the system is to improve the working performance of Faculty Computer Science and Information Technology (FCSIT) staff especially academician, administrator and technical staff.

Basically, the idea in developing this system using web-based is the availability for the FCSIT employee to perform administrative tasks and store information in the system. The main idea is to implement the system as a web-based system by eliminates the need to install application and at the same time to ease the maintenance and update of the system by the web administrator.

The existence of this system also due to:

· Communication problem among workers in the organization.

· Problems which workers’ faced in their workplace normally involving the application. For example yahoo messenger, worker’s most install application first and then used. They can consult web administrator for the solution to their problems once the system is implemented.

Some of the problem occurs when applying the manual ­systems are:

· Lost of important data due to worker carelessness.

· The current systems giving slowly respond to the user. For example used system manual is slowly.

· High cost and take too much time.

· The data that have been gathered is difficult to process.

Waterfall methodology will be applied as the system method. This methodology is chosen because it is simple and easy to understand. Each stage ends with a verification and validation activity to minimize any problems in that stage. Arrows go back and forth only one stage at a time. This represents the iterative development between two adjacent stages in order to minimize cost. It is assumed that all information necessary for a stage is known.

Plan design interface system. Design system follower requirement. The design phase is separated into two sections, which is logical design and physical design. The logical design involves the designing of the system during the first and second phase. Meanwhile in the physical design phase, it is more on the designing the system on paper that is consist of some aspect like input, output, and database. All the design will be implemented with taking consideration of the successful rate on the system and to make sure that it is implemented within the timeframe. During this phase, it will also try to explain how the system works from start to end on paper such as the Entity Relationship Diagram (ERD), Data Flow Diagram (DFD), and chart. A research will be conducted to solve a problem if occurred.

When the design is fully completed, an implementation of that design is made by programmer. The system design will be written into real coding which is realized as a set of program. The coding will be modified repeatedly until the users satisfy with the system. Some code is written and then fixed when it does not work correctly. This execution will execute by the internet programmer first that will include Hypertext Markup Language (HTML), then database programming and Hypertext Preprocessor (PHP) to link HTML programming with database.

Finds any error occurs in this system. Fix error in the system. The testing method that is going to use is white box testing and black box testing to test the complete system.

Each phase of implementation will be tested which is to find the problem that occurred in the program. The system will be tested for validation and verification. Training for the system begins.

· Management will manage the information system and create the database.

· The information that is given by the user will be stored into the database.

Through this system usage, it will make job easier and more efficient. With the system can reduce more problems dealt by staff. Cost, crime, and can make people live in hinterland know and expose them to learn and get experience with the current technology.

This Final Year Project 1 was initially started from 1st of July 2009 and will be due for submission on 10th of November 2009.

Chapter 1.0: Introduction. In this chapter will be consist the introduction of Employee Information System (EIS) for FCSIT. Beside that, problem statements, objective, methodology, project scope, significance of project, project schedule, expected outcome and outline of project report would include within this chapter.

Chapter 2.0: Literature Review In this chapter we consist the review study regarding the existing system compared to the Employee Information System (EIS) for FCSIT. Comparing will be carrying out between the proposed systems with the other similar system. Beside that, comparison also includes the programming code, system interface, system features and implementation tools.

Chapter 5.0: Conclusion and Future Work In this chapter will consist the strengths and weaknesses of the system by determine whether all the objective and project scopes have been achieved and covered. Besides that, some suggestions will be carrying out for the future works to the PC control system for monitoring user’s activities usage.

remi
YOU SMILE OUR BEST RETURNS